By Margaret Litvin and Johanna Sellman 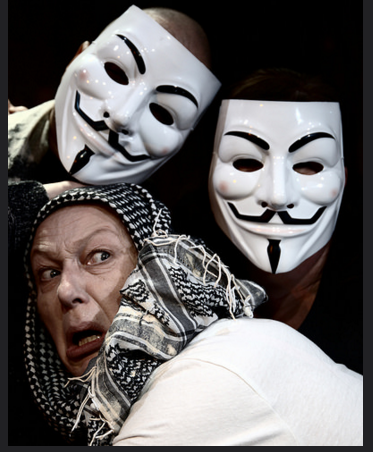 The playwriting debut of internationally celebrated Iraqi writer Hassan Blasim is being staged in Tampere, Finland, the country’s “theatre capital,” about two hours from Helsinki by train, where now Helsinki-based Blasim used to live. We arrive. Downstairs at Tampere’s Telakka (Shipyard) pub and cultural center, a few dozen twentysomethings drink beers and wait for the appearance of the Tampere-based psychedelic rock band Death Hawks. Upstairs, at the Telakka Theatre, about 65 theatregoers crowd into a small square walled in by wooden slats. Actors in Anonymous masks peer in through the spaces between the slats as the lights go down. We are fenced in; a solemn male voice begins to recite. We know no Finnish, but having read the script in Arabic and in Jonathan Wright’s forceful English translation, we understand that this is Hassan Blasim’s short story, “The Truck to Berlin,” a condensed rewrite of Ghassan Kanafani’s Men in the Sun in which traffickers abandon a locked truck full of Arab migrants to an inhuman fate in a forest in Serbia. The prologue forces us into the position of the truck’s inmates, uncomfortably close to strangers and unsure what comes next. This harrowing rite of passage achieved, we are allowed to enter the small blackbox theatre and find seats.

Nothing else in The Digital Hats Game (Digihattupeli in Finnish) attacks the audience so viscerally. For the next hour, a group of six actors rapidly shift between roles and characters. Most of them are hackers who perform stories-within-stories, argue, develop a program to hack and crash U.S. army drones using technology bought from terrorists, and reminisce about the Stuxnet virus. They also try to fight off infiltrations by state intelligence services (a middle-aged woman in a bright red pantsuit, with a ringing bad-guy cackle), fundamentalist ideologies (a jihad-preaching imam and a Quran-burning preacher with a barbecue grill, both played by the same actor), and political despair.

The Digital Hats Game builds on the themes of crossing and subverting borders that haunt and structure Blasim’s short stories. These stories, published on http://www.iraqstory.com and in three English collections (The Madman of Freedom Square and Iraqi Christ from Comma Press in London, and The Corpse Exhibition from Penguin in New York), narrate both the hardening of borders amid migration and civil strife and the various kinds of interconnectivity that traverse, transcend, and break down borders, both between nations and between humans and their others. Blasim’s stories sometimes imagine such processes through the fantastical or the grotesque, for example through parasitic relationships or the violent blending together of human bodies. In “Crosswords” Marwan, a young writer of crossword puzzles, wakes up in a Baghdad hospital to discover that his body has been occupied by the soul of a police officer who died while responding to an attack on his newspaper. The two are forced to coexist and intersect, much like the increasingly obscure words that form Marwan’s crossword puzzles. In other instances, entities such as viruses, search engines, and shared blood banks call attention to the ways that human beings are networked and interconnected. In the story “A Wolf,” the narrator muses, “If, for example, a poet wrote about loneliness in Finland, then his poem could be the dream of someone asleep in some other part of the world. If there was a special search engine for dreams, like Google, all dreamers would find their dreams in works of art.” The networks and porous borders that are imagined in Blasim’s stories alternate between the claustrophobic, the nightmarish, and the reassuringly relational. As recurring themes in his fiction, they raise questions about our current age and its uneasy balance of border building practices and global interconnectivity.

In The Digital Hats Game, activist hackers, of course, are also in the business of infiltrating systems and subverting borders. While one of the hackers on stage euphorically calls out in English “No limits, no borders, no family problems!” voicing the idealist register of their open war on global injustices and the anonymous community of those who share their goals, they also face terrifying forms of violence (both private and state-sanctioned) that disregard borders too. Many open wars overlap. In the play, drones, invasions, and occupations are ever present. At times, footage from World War I plays on the screen, reminding the audience of the history of both warfare and contemporary borders that remain under dispute. In a half-virtual, half-real “Borders Game” hackers deactivate border security controls and score points for each refugee who can successfully cross a border and remain undetected by authorities. But the game turns out to be a trap rigged by an agent of the international police in order to infiltrate the hacker community. Hacking is presented as a form of activism that holds the promise of immediate change even as this virtual arena is being hacked by competing interests. The open war that The Digital Hats Game hackers are fighting is both one of endless and borderless possibilities and one where they also expose themselves to uninvited invasions.

Blasim’s text is a memory play. Set 16 years in the future, it flashes back to delve into the hackers’ backgrounds and failed aspirations as “white hats,” anti-capitalist activists, and performance artists. Trimming back the characters and their lives, the production instead accentuated the few Arabic and Islamic points in the plot, incorporating Arabic words (as a European Muslim character chose between “mawt” and “hub,” i.e., violence and nonviolence) a scene where the three female actors veil and pray (one then delivering a fundamentalist rant in English), a Sufi-style whirling dervish performance, and even a brief parody of belly dancing.

The production lacked the riveting drive of Blasim’s short stories. Instead it aimed to coordinate many moving parts: Blasim’s multi-layered and non-chronological script (in Wright’s English and Sampsa Peltonen’s Finnish versions), two co-directors of different generations and styles (Hanno Eskola & Antti Mankonen), two co-producing theatres in Finland and Estonia, and actors from both companies, not all proficient in each other’s languages. To compensate, the two Estonian actors spoke many lines in English; since these were the rebellious teenager and the gadget-loving young hacker, the language choice made dramatic sense. Most intriguing of all were two visual elements: a video feed that transformed onstage videography into eerie and hyperrealistic live projections from unexpected angles, and the use of wooden puppets (including an entire miniature village made of balsa wood) to represent the most violent elements of Blasim’s script, including a scene where a pilot is shot down and his body burned by Syrian government soldiers who then shoot every dog in the village. Other scenes – calling for onstage depictions of waterboarding, gang rape, and murder – were cut altogether.

Did the play depict the end of hacktivist idealism, or only the beginning? The show ended abruptly, with the ringing of a mobile phone attached to an empty life vest – the ambiguous ending of the refugees’ “Borders Game.” After the curtain call, the audience was herded out through the fire escape in back.

Margaret Litvin is associate professor of Arabic and comparative literature and founding director of Middle East and North Africa Studies at Boston University. Her research explores the Arab Shakespeare tradition, the literary legacy of Arab-Russian cultural ties, and post-2001 Arab/ic theatre for western audiences. In 2015-6 she is based in Uppsala, Sweden.

Johanna Sellman is assistant professor and Middle East Studies librarian at The Ohio State University where she teaches critical research skills and a course on global information. Her research interests include Arabic migration and exile literature, visual culture of the Middle East, and translation.  She is on research leave in Uppsala, Sweden during the spring of 2016.
Jaga